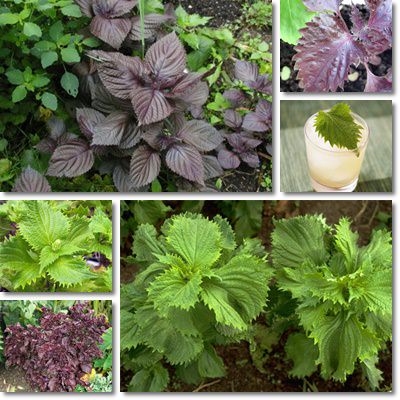 The green shiso plant is very similar in appearance to the stinging nettle, with beautiful bright green, serrated leaves, yet considerably rounder in shape. Another variety, the red shiso, has red-purple leaves and stems as a result of powerful anthocyanin pigments, compounds that occur naturally in the plant and boast potent antioxidant properties. Green varieties with purple elements are also commonly found.

Shiso is an important part of modern Japanese and Korean cuisines and although it is native to Japan, Korea, China and India, its naturalization in numerous temperate parts of the globe has lead to an uncontrollable spread. For this reason, shiso is considered to be a weed in certain countries in the US. The weed-variety can be easily distinguished from the edible shiso by its lack of fragrance.

In Asian cuisines, shiso (perilla) is as common as Brussels sprouts are in Western cuisine. In Korean, Japanese and Vietnamese cuisines, shiso sprouts are often used as a side dish to rice. Shiso leaves can be added to pasta, noodles or stews and even baked into pastry. Shiso seeds are consumed roasted and, unfortunately, salted. Alternatively, shiso seeds are grounded and used as powder spice or condiment to give flavor to stews. Perilla leaves can also be pickled, although they are highly appreciated in salads as well. Another very popular dish combines shiso leaves and sushi. Red shiso is much spicier than the green variety. Some say it has a powerful anise flavor. Green shiso is much more palatable, with a slight cinnamon flavor.