Purple, green and white asparagus are actually the same plant: Asparagus officinalis. They are merely different colored variants of the same vegetable. The different colors also order differences in nutrition and therapeutic properties. For example, purple stems have anthocyanin antioxidants vs green stems which have chlorophyll and carotenes vs white stems which have neither purple anthocyanins, nor green chlorophyll or carotenes. Green asparagus is also higher in vitamin K and vitamin A, purple asparagus is highest in antioxidants, whereas white asparagus, although lowest in antioxidants, has shown anticancer activity in animal studies. Other nutritional differences are likely and can be explained by differences in soil quality and other growing conditions as well as variations specific to the color variety of the plant.

Green and purple asparagus are the same vegetable according to their scientific name, Asparagus officinalis. All varieties of purple asparagus are actually developed from green asparagus. But while the two color variants are grown in the exact same way, they are different from one another in terms of appearance, taste and nutrition. The most obvious difference is color: purple asparagus has purple skin, although it has a greenish tinge underneath and white flesh. The purple color comes from antioxidants called anthocyanins, essentially natural pigments that are responsible for red, blue, purple and black colors in plants. But because anthocyanins are water soluble, they leak out in the cooking water during boiling or start to fade when the stems are roasted or baked for too long. This is why purple asparagus is often harvested young, when it’s still tender enough to be eaten raw. Some people don’t even peel the skin – not only is the purple skin sweeter and more palatable, but it’s also an important source of antioxidants. Eating it raw is done to avoid cooking and losing the beautiful purple color. Green asparagus on the other hand is green because of chlorophyll which is not soluble in water. This is also why the pigment doesn’t leak during cooking and the stems retain their original color intensity.

Another difference between green versus purple asparagus is nutritional status. For one, purple varieties are higher in sugar (according to estimates, up to 20% higher sugar content), hence their sweeter taste. Whereas green varieties are more bitter, a sign of a lower sugar content. The older the stems, the stronger the bitter taste. Green asparagus is also higher in fiber and vitamins K and A versus purple. Also see the benefits of purple asparagus.

The two are the exact same vegetable, except they come in different colors. Green asparagus owes its pigment primarily to chlorophyll, but also contains carotenes. By comparison, white asparagus is unpigmented, meaning it has no color-giving compounds. But to achieve this, white asparagus is grown underground or covered, to avoid sunlight exposure. Versus green asparagus which grows above ground and is left uncovered. However, the variation in color determining the staggering difference in antioxidant content does not make one less healthier than another. Animal studies show an extract of white asparagus both reduces inflammation markers and initiates apoptosis, or programmed cell death, in a line of colon cancer cells. 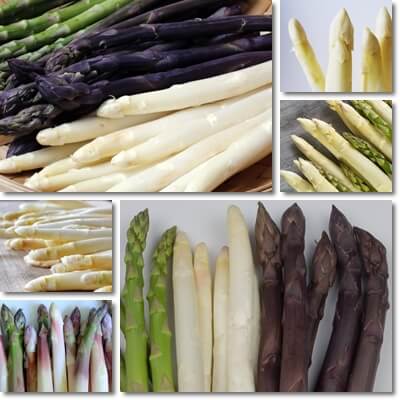 But white asparagus is not always completely white. Lower-grade spears that get exposed to sunlight start developing pigment, causing the areas exposed to sunlight to become pink, violet, purple, yellow or greenish. Despite the completely white spears being considered more aesthetically pleasing, the white and pink, violet, purple, yellow and green ones are both pleasing to the eye and a source of important antioxidants such as anthocyanins, carotenes and other polyphenols, adding to the health properties of white asparagus. Find out more about the benefits of white asparagus.

Green asparagus is also typically more slender-looking, less bitter to the taste and has more vitamin K and vitamin A. Vs white asparagus which grows to be thicker and subsequently, woodier and more bitter. Of course, harvesting it sooner ensure a more mild taste and palatable texture. But if thicker stalks are preferred, they need to be peeled before cooking to both reduce bitterness and improve texture. Also, white asparagus is believed to have almost no vitamin A, a lower fiber content and fairly little vitamin K.

Purple asparagus is the variety highest in antioxidants. The rich purple color is an indicator of the presence of important amounts of anthocyanin antioxidants, although white asparagus also contains flavonoids and other polyphenolic antioxidants, albeit in smaller amounts. But if the white stems have colorful tips, whether greenish, yellowish, purple, violet or pink, then they also contain chlorophyll, carotenes, anthocyanins and other pigmented antioxidants. If the stems are almost completely pink or pink with violet, purple, green or yellow, then it’s pink asparagus we’re talking about. See the benefits of pink asparagus.

Despite being the lowest in antioxidants of all three varieties, an extract of white asparagus has been shown to reduce the progression of colon cancer by activating apoptosis, or programmed cell death, in the cancer cells and reducing inflammation (animal studies). While both purple and white asparagus are a source of many essential micro-nutrients, notably B vitamins, calcium, copper, chromium, iron, magnesium, manganese, phosphorus, potassium, selenium, sodium and zinc, health officials have not released information regarding exact amounts (article will be updated when official information becomes available). But purple asparagus is generally believed to be a better source of vitamin K, compared to white due to the absence of pigment in the latter – for the most part, green vegetables, especially leafy greens, are the best sources of vitamin K, not white vegetables.