Even so, there are benefits to supplementing with both magnesium carbonate and oxide. Despite having poor bioavailability and lower uptakes than most other forms, they do help correct a deficiency of the mineral and associated symptoms and side effects. Supplementing with either one of the two forms holds benefits for the digestive, cardiovascular and nervous systems, muscles, bones, mental health and even blood sugar control in diabetes. 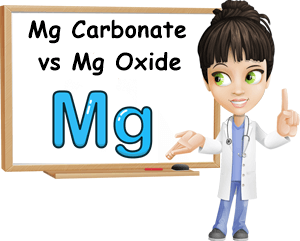 What is magnesium oxide? Magnesium oxide (alternative names: magnesia, magnesia alba) is an inorganic form of magnesium and possibly the most common form used in dietary supplements. It is obtained from the naturally-occurring form of magnesium carbonate, known as magnesite, by heating the latter at high temperatures. Despite having the lowest absorption rate of all forms, as a dietary supplement, it has the highest amount of elemental magnesium of all forms (meaning it contains the most actual magnesium). Studies show magnesium carbonate absorption rate averages at 10%. In the best of cases, absorption can go as high as 20%. This is because Mg carbonate is an inorganic form of the mineral and, like all inorganic forms, has a modest bioavailability. What this means is that very little of it is actually taken up by the body. However, magnesium oxide absorption rate is even lower, averaging only 4% or up to 10% in the best of cases. Mg oxide is also an inorganic form of the mineral and, as a result, has poor bioavailability. In other words, this particular formula is poorly absorbed at the intestinal level. But because it has the highest amount of elemental magnesium out of all forms of the mineral (meaning more actual magnesium in the supplement doses), you do get to absorb something despite absorption rates as low as 4%.

But given that both forms have overall poor absorption rates, benefits resulting from supplementation may vary greatly. Generally, people tend to respond better to magnesium carbonate than to oxide. Most likely benefits include: constipation relief, indigestion and heartburn relief, reduced stomach acidity and potentially less severe or less frequent muscle spasms or cramps and cardiac manifestations (extrasystoles, palpitations and other forms of irregular heartbeat or arrhythmia).

Common: Side effects as a result of supplementation with magnesium oxide or carbonate are mainly associated with excessive intakes and may include digestive upset, loose stools and diarrhea, nausea, vomiting, abdominal cramps.

Contraindications: kidney disease. Kidney disease could prevent normal elimination of the mineral through urine and predispose to high blood magnesium levels and associated side effects. Talk to your doctor more about the right dosage of the mineral for you if you have kidney problems.

Is magnesium carbonate or oxide good for correcting a deficiency? Neither form is the absolute best form of the mineral, not even close to the best ones. But both can be used for correcting a deficiency, with varying results. The more magnesium-deficient a person is, the more of the mineral they are likely to absorb, even from forms with otherwise poor absorption rates such as the oxide and even the carbonate. But overall, of the two, the carbonate form is better than the oxide and likely to be more effective as well as generate better results.