By medical standards, just one type of bowel movement is considered normal: a well-formed stool of a uniform brown color, odoriferous and of solid consistency, smooth on the surface, but also soft so that it is easy to pass, almost effortless. Any variation of this can easily be classified as abnormal, whether it’s white specks in the stool, a bright green, orange or red stool color, lumps or cracks on the surface or too loose a stool. The main concern with abnormal bowel movements is there may be a hidden, potentially serious pathology. This is why investigating bowel movements for abnormal characteristics is essential for good bowel and general health and all medical professionals recommend observing and reporting persistent or worrisome changes in bowel movement appearance and habits.

Normal bowel movements are the result of an optimal diet and a balanced lifestyle, and indicate the lack of bowel-related and other pathologies. Here is what a normal bowel movement looks like: a sufficient stool output, evacuated with regularity, and a stool that is odoriferous, well-formed, shaped like a sausage or a snake, with a smooth surface, without cracks, but with a soft enough consistency that it is easy to pass, in an almost effortless, reflex-like evacuation. When bowel movements vary in any characteristic from what is considered normal, they can be classified as abnormal. That could mean a different bowel movement size, shape, odor, color, consistency or frequency, or any problems related to emptying the bowels, occurring before, during or after that time. For example, abnormal bowel movements can be unusually small in amount, the size of a pencil, have weird shapes, like small balls or small ragged pieces, come out flat, float or smell downright awful. Let’s break down how all the different types of abnormal bowel movements can look like so you know what to look out for:

What is an abnormal bowel movement size or amount and shape? If you consistently pass a well-formed, sausage or snake-like stool, you’re in the normal range. If it’s smooth on the surface and soft enough to be passed effortlessly, it’s ideal. If it’s a little dry or rough, with cracks on the surface, you may need to drink more water and less coffee, and maybe walk more. If bowel movements are shaped like small balls, pellets, pebbles or any kind of hard bits, but there’s (almost) enough of them to make up a healthy, normal stool output, you may be looking at dehydration and/or constipation. Find out more about pellet or pebble stools.

If the stool is ragged, loose, drooping or mushy, and comes out whole or in small pieces, it’s usually a sign of diarrhea and can be caused by eating spoilt food, a food intolerance or an inflammatory bowel condition such as IBS. But bowel movements in thin shapes, like a pencil, are always abnormal. Bowel movements the size and shape of a pencil, or bowel movements that come out flat like a ribbon, or even curly, are usually a sign of an obstruction somewhere along the gastrointestinal tract (e.g. hemorrhoids, polyps, tumors). Very little stool output and abnormally thin stools absolutely need to be checked out. However, not all stools that come out flat mean cancer. Find out what else causes flat, ribbon-like stools. 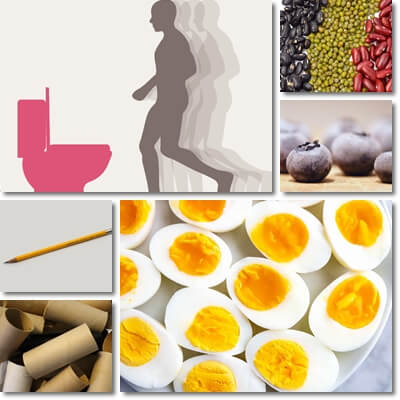 What color should normal bowel movements be? Ideally, a uniform (medium) brown color. While abnormal-looking, bowel movements can also be two different shades of brown, without this indicating any serious pathology. For example, you can pass a two-color stool that is part lighter-brown and part darker-brown, meaning that they are two different bowel movements that have fused together and come out at once, in one piece. Choice of food, digestive enzymes secretion and transit time all play a role in bowel movements color and can cause some stools to be slightly different shades of brown, but still in the normal range. However, a too light a brown color, such as the color of cardboard, is abnormal and best investigated.

A darker green color can be caused by eating foods rich in chlorophyll and other green pigments (e.g. spinach, kale, chard, nettle, seaweed), in which case it’s not an issue. If it’s a light, bright green color, a too fast a transit time or various digestive issues may be the cause. Find out more causes of green stools and what to do about them.

Unless you’ve eaten red foods such as beets, lots of red tomatoes or tomato sauce, your bowel movements shouldn’t be red. A bright red color may indicate bleeding lower on the gastrointestinal tract, whereas a darker red color may indicate bleeding higher up on the gastrointestinal tract. Similarly, unless you’ve had lots of dark chocolate or black licorice or taken iron supplements, your bowel movements shouldn’t normally be black or too dark-colored. See my list of 12 foods that color stools.

Other abnormal bowel movement colors to look out for include bright yellow, bright orange, pink, maroon, even blue and purple, but also pale, clay-colored or whitish bowel movements. Find out all about these abnormal stool colors and what they mean.

Bowel movements smell. They smell pretty bad. Sometimes more than usual, especially if you’ve eaten high-fiber, high-protein or high-fat and fried foods or some odoriferous foods such as cabbage, Brussels sprouts and other cabbage family vegetables, egg yolks or whole eggs. If the smell is unbearable and you can’t trace it back to something you ate, it’s a good idea to see your doctor for some tests.

It’s normal to have a bowel movement every single day, first thing in the morning when you wake up or any time during the day. It’s just as normal to have a bowel movement three times a day, after every main meal, or once every 2-3 days. What counts as abnormal is a bowel movement frequency that causes discomfort. Going to the bathroom too frequently can cause local irritation and discomfort, even dehydration, whether it’s two times in a day or once a day. Going too infrequently can cause abdominal discomfort, bloating and a general feeling of unwell – you can tell if stools are too dry, cracked and difficult to pass. To identify abnormal bowel movements frequency, look for any signs of discomfort or changes in appearance.

Causes of frequent bowel movements in adults may include functional or infectious diarrhea, instances of food intolerance, food sensitivities, a too high a fiber intake, a too fast transit time, coffee consumption, in excess or not, irritant foods such as spicy foods etc. Causes of abnormally infrequent bowel movements or lack of regularity may include sedentarism, insufficient fluid intake or dehydration, a too low a fiber intake, digestive conditions such as IBS (irritable bowel syndrome) and others.

Normal bowel movements are soft, but well-formed, a consistency that allows for easy passing. A consistency that is too soft, mushy, loose or liquid is abnormal and can be caused by instances of food intolerance, inflammatory bowel conditions or infections. Bowel movements that are too dry have a rough texture and are too hard to pass. These can be caused by dehydration, a too low a fiber intake, insufficient exercise or digestive conditions that predispose to constipation such as IBS, or irritable bowel syndrome. Mucus in the stool, occurring with too loose or too hard bowel movements, is also an abnormal sign to look out for.

And there’s another kind of abnormal bowel movement consistency to look out for: stool with small things in it. These could be pieces of undigested food. For example, almonds or other nuts can look like white specks in the stool. Undigested corn can appear whole in the stool, or as tiny, pale yellow specks. But some intestinal parasites can also look like tiny white specks in the stools. Tomatoes and bell peppers, especially when eaten with skin, and some seeds, can also be present in stools and look like blood. The rule of thumb for all kinds of abnormal bowel movements is: if you can’t trace it back to something you did or ate in the past day or two, and it’s been going on for a week, a month or more, it’s probably good to get it checked out.